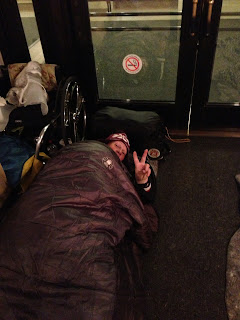 Ever feel compelled and driven to do something, to take some action or go experience or see something without knowing exactly why? When I found out there was an Occupy event at the Department of Veterans Affairs Building going on at 810 Vermont in NW Washington DC I had such a feeling. I didn’t know if it was a real event or if anyone would be there for sure. I took a chance, used my frequent flyer miles and headed to DC. My flight arrived at 1:15 Am so I spent the first night engaged in a conversation with a young girl who is an athletic trainer. We sat on a bench in the airport and I shared stories with her. It felt much like the bus bench scene in Forest Gump. Was I there to meet and help this person I wondered as she became teary eyed in the conversation describing herself as lost, unable or not having the courage to do the things she wants to do in her life? This was all of the advice I had to offer her.

It is a switch in effort and focus from thinking about all we cannot or have not been able to do, overcoming doubt and moving forward with a new purpose and method to achieve personal goals or success. To be Able requires effort and action not complacency or stagnation. It requires dumping the behaviors that hold us back and learning new ones that move us positively forward. Its about being open to change and then making it happen for yourself not waiting or counting on someone else to do it for you. It seemed to be a message she needed to here and she left our meeting on a mission. She caught her bus and I hailed a cab and went on to the Occupy event.

I had been traveling and up all night. I know how difficult it can be sleeping on the street so I did not want to arrive in middle of the night. When I did arrive I took a space on the sidewalk at the end of a row. I rolled out my bag, placed all of my valuables inside my bag with me, I put a tarp over my chair and my head and went to sleep for two hours. I was woken up by a fellow named Mike who was looking for his blanket. Seems someone had taken one from him during the night. He was my first encounter with one of the occupiers. I asked him questions about the Occupy Department of Veterans Affairs event… It started at the big Occupy DC event last year during which a group of veterans got together and decided to go to the Department of Veterans affairs with some questions and some ideas on how to help veterans. The DVA said they would send someone out to speak with them and no one came out. That was October 4, 2012 and they have been there ever since. Born from the Larger Occupy Washington DC event it became Occupy the Department of Veterans Affairs event. They have no plans of quitting or leaving anytime soon and will be there as long as it takes. 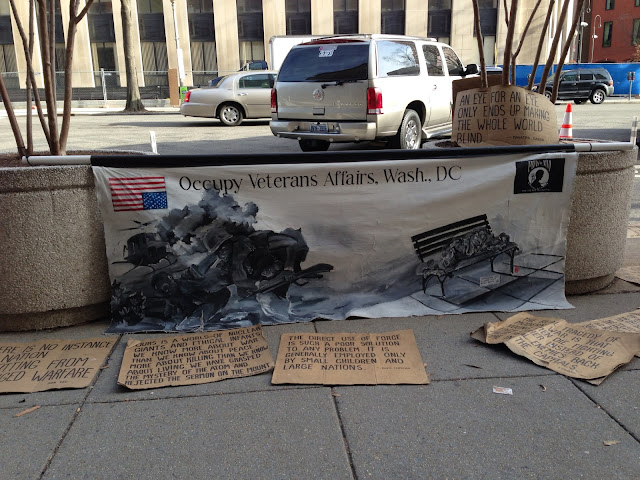 While I was talking with Mike the tarp next to me started shuffling around and a head pops out and Steve introduced himself to me. He also volunteered to show me where the YMCA was in case I wanted a shower. They all told me I should look for Frosty the garden gnome and told me to go to the Starbucks just down the road and to the right so I rolled up my bag and grabbed all of my possessions which wasn’t much and set off to Starbucks to find Frosty. Inside the Starbucks, sitting by the window was a silver haired and long bearded older gentleman who looked like a garden gnome. Obviously this was Frosty. He told me the same story as Mike about how it all started and all of the things they have done to them to try and get rid of them but the DC police have defended the Veterans constitutional rights to peaceably gather and explained to the DVA that they are on public sidewalk and not on DVA property. Then the DVA began pressure washing the sidewalk on a daily basis but they have stopped as it did not work. They moved me from the outside edge to inside the doorway saying it was warmer but there is an order and protocol to homelessness and where you sleep in the group. I was hesitant at first because I did nothing to earn this upgrade and then I reminded myself I was a visitor and these were Veterans. It was very noble and hospitable gesture with hints of overprotectiveness. I did move to inside the doorway where anyone approaching could only come from one direction that I could defend easily. I felt much safer there. Under the cover of scaffolding it may have been warmer also but it was still damn cold! There is a place called the peace house that was used for the large occupy event where people could go use the internet but the ongoing services there are dwindling and it will probably be closing soon so now the surrounding coffee shops are the place to go to warm up, grab a cup of Jo and get online. The Veterans who are clean and organized have a good reputation with most of the businesses and they are supportive. None of us were denied entry or service because we were occupiers or homeless. The people who are in and out of the surrounding businesses and the locals know what is going on and the bad reviews about the Occupy Veterans being a bunch of homeless bums I found to be completely false. These could be complaints about the other homeless population that surround us or could be generated by the DVA people who are uncomfortable with the Veterans presence there. There is much to hide and I can’t imagine that everyone is happily accepting and administering the orders and policies that hurt our wounded warriors and veterans. These are things that both consciously and subconsciously affect most human beings negatively. They have been given the orders not to engage in conversations with the veterans and the threat of job loss and devaluation is evident in the tension. There seem to be many frightened people at the DVA who are conflicted and unhappy in their work and many others who seem to be hostile in mitigating their guilt. I had to stay on a workday just to witness this and see it for myself. My three days here have been a positive experience and what these veterans are trying to do, I see as being very important. Why continue to utilize a system and a method that is clearly broken beyond repair, 900,000 backlogged Veterans claims for benefits and growing.

There is a system of automatic denial and keywords and events are sought, created and expunged from medical records every day to generate a denial because denial counts as adjudication of the claim and earns the reward of a congressional mandated time stamp for adjudication of a Veterans claim which is now 125 days. Very few claims are properly and fairly adjudicated in 125 days. Don’t believe me, check the appeals rate. It is easier to deny and there are no physical or financial consequences of that action to the DVA or individual employees. There is a consequence to the Veteran and they do this without regard for human life. These increased suicides I view as casualties of this system.

What happens after first denial is that then the Veteran has to file an appeal of that decision this process can take time and usually leads to another denial. Any veteran eligible for medical or monetary assistance due to service related injury is ineligible for insurance and public assistance. They say it’s the government’s responsibility. More denials, can’t pay rent, can’t work, can’t get food stamps, can’t get appointments for care at VA, can’t get paperwork properly filed out and disability documented for claims because VA is a teaching hospital and all notes are entered by students who don’t use correct language or terminology. If the veteran has any resources left by this point or any hope then they will continue to fight. The DVA relies heavily on family and friends of the veteran to provide support financially and emotionally to the veteran and taxes those relationships to the full extent possible usually fracturing any sustainable connection the veteran has to those sources of support. The VA abuses counseling notes and personal information contained in medical records against the veterans in the adjudication process and in the system to discredit veterans so they are not to be trusted. Veterans often end up isolated and alone with no one to turn to for support and no hope. Years later after multiple hearings and denials a successful veteran will finally get through the process in 10-20 or like Frosty 37 years at no consequence to the Department of Veterans Affairs. How many have died trying? Too many! How many have given up? Too many! These losses are unacceptable! Fix the system for God’s sake; don’t just hire more adjudicators to do the job the same way, change the way the job is done. Properly and fairly adjudicate the claim in 125 days so lives don’t have to be needlessly destroyed while a soldier fights a battle that he is not trained for, never saw coming and should not have to fight “The struggle for benefits and the battle with the Department of Veterans Affairs”. 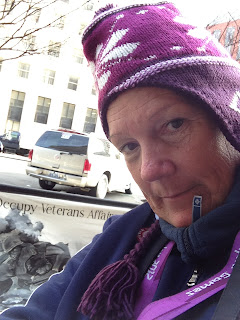 There was no way to quickly and easily summarize what the process is like so I apologize for the lengthy blog. This information is a compilation of shared stories over my 33 years of service to Veterans in the Disabled American Veterans and the Paralyzed Veterans of America as well as my own personal struggle. I am one veteran with an all too common story.

The Occupy the Department of Veterans Affairs is taking place at 810 Vermont NW Washington DC, they have a fb page and anyone who is for the cause is welcome to join in. Homeless experience helpful but not required. They will take good care of you there. Street rating ***** 5 star