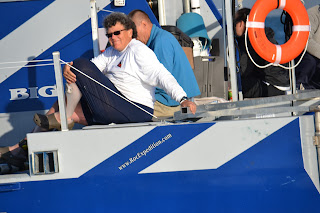 
Via Sat Phone to Deb

Today’s fun on the boat….African Day. Louise gave Angela something (ya know, you don’t always get clear details on the Sat Phone) and Angela made a hat that looked tribal. She matched that up with her tech towel and paraded around the boat. Not to be outdone, Ryan decided that he would participate in African Day by parading around in a loincloth. Hum….I guess after being out on the ocean for 25 days they are starved for entertainment. The other entertainment people have engaged in is writing on the boat with markers and now Big Blue looks like a graffiti canvas.

Angela says everyone has about 20 days of snack packs left and feels they will have plenty of food to make it to Barbados. Angela has worked on the solar water boiler and has gotten it to work again. Apparently, a blockage was not letting the full amount of water release from the boiler. Angela was able to clear the blockage and fix the pump and it is providing water for rehydrating meals. The solar water boiler allows them to heat water without using the precious little stove fuel they have left. She has also built a solar oven out of a dry bag, and an emergency blanket. This allows her to keep the meals warm whilst waiting for the other meals to cook. The solar boiler only makes enough water to rehydrate two meals at a time. Angela’s other project is the external Sat Phone battery charger which is still in progress. I am working with Iridium to get diagrams of their products give to Angela. We are getting close and hopefully we will be able to resume sending messages to the boat.

They have had some huge waves hitting the boat from the back. At one point Big Blue was rolling along at 13 knots. There is some water in the cabin, but heck…13knots, isn’t it worth it. She expects the winds to change to easterlies, which will push the boat straight west. Currently they are moving southwest. They are looking forward to the easterlies and getting to Barbados. Aleksa tried to give me her drink order, but couldn’t hear it due to the Sat phone. That’s my story and I’m sticking to it……

Angela says people are doing well for the most part. There is humor and camaraderie on the boat. All of them are ready to be sipping cocktails in Barbados.


Posted by debmole at 2:00 PM No comments: Links to this post